It’s the finals!  Series two has gone by so fast.  It seems like yesterday I was moaning about all the lemons and now, not a lemon in sight. What better way to cap off the second season than with this perfectly historic European bake.  Oh, and A LOT OF CHOCOLATE!

Before launching into this recipe I did some reading on the Sachertorte, mostly because I couldn’t figure out if there was supposed to be a space between Sacher and torte or not (which I still don’t know). But what I found was a lot more than how to properly spell the thing.  First of all “torte” is technically a cake made without flour.  Secondly, this torte is old!  I mean there are hundreds of years of tradition behind this recipe. I guess there won’t be any slapdash substitutions this time.  I must do this Austrian beauty justice!

I started making this recipe at about 9:30pm one night, which on most nights is when I head to bed.  But for some reason (read – because I had just had three cups of tea) I felt ready to take on the torte.  I beat my butter and sugar until it looked fluffy and good enough to eat with a spoon.

With my chocolate cooling on the side I took a look around and noticed the chaos around me.  I have to say I have noticed that I am going through dish detergent at an alarming rate lately and I think I may now know why.  This is a look at the set up for stage 1 of the torte….

Thankfully we have a great dishwasher and now just a slightly higher water bill. Back to baking.  The chocolate mixed into the butter beautifully and I added in the almond flour and regular flour (hey! torte’s aren’t supposed to have flour?!  Mary must have taken some liberties with the original recipe).

I am slowly learning I have some problems with over whipping egg whites.  Specifically when there is no sugar added.  My whites seem to go from soft peaks to dry and crumbly without the illusive stiff peaks in between. Please someone tell me what I’m missing here!  I don’t think I can avoid whipping egg whites for the next five seasons so I’m going to have to figure this out!  Not wanting to waste 5 more eggs I mixed them in, crumbles and all, and I don’t think any harm was done.  The batter was quite thick but looked nice and chocolatey so I popped it in the oven. 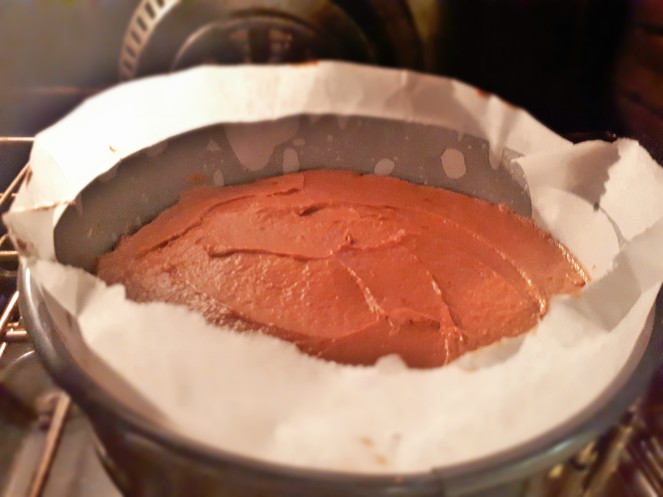 I baked it for the full 50 minutes.  With the torte cooling it was off to bed.

The next day I had a cooled naked torte.  Time to dress it up.  The recipe calls for sieved apricot jam to be brushed over the torte, as I reread the recipe now I am realizing that I didn’t heat the jam.  I am so ashamed!  I guess I was too busy with my jam photoshoot to properly read the instructions.  But it was worth it, look at my cat in this picture!

Either way the jam went on great.  And I would be so bold as to say you could skip that step if you found yourself in the bake off tent pressed for time.

I was pleasantly surprised to find the ganache was really simple to make and it looked picture perfect.  Glossy and smooth.

I will certainly be making ganache again and I may even try my hand at one of those mirror glaze cakes you see all over Instagram.

I was feeling very pleased with myself at this point and was ready to send this torte off to Vienna to be served in the Sacher Cafe.  But first I had to label it.  It is tradition to write Sacher on the top of all Sacher tortes so I took up my last bowl of chocolate and tried my hand at cake writing.  Let me just say all those people that work at Dairy Queen or in the grocery store bakeries don’t get enough credit.  Writing on cakes is very difficult.  You have to stay centred, keep the font even and not put your hand in the icing/glaze.  I managed to get something written on the torte but it wasn’t exactly up to the Sacher standard.

So there you have it the historic Sachertorte as made by me.  Sadly I can’t eat chocolate right now because it upsets my stomach but I was told that it tasted like a less dense brownie.  Which to me sounds like I would rather have the brownie but my husband liked it. After reading some more I learned that it is traditionally served with whipped cream to cut through the dryness.  I’m kind of surprised that isn’t mentioned in Mary’s recipe but we had whipped cream in the fridge so who are we to question tradition.

That’s it.  I survived series 2 now on to series 3, my personal favourite!  I don’t know if I’m ready for 8 strand loaves or fondant fancies but there is only one way to find out!

View all posts by agoodbake